I’ve got a HUGE kit for you this month. The palette was awesome for the original mid-century modern theme that it was suggested for, but it makes a fantastically cheerful December holiday palette. I’ve created some mid-century papers, in a nod to its original intended use, but most of the ladies have created traditional holiday-centric elements. Marisa and Erin Crouch are two that I know have done some mid-century parts. That’s not to say any of the others’ kits are bad; on the contrary, I think this is one of our best trains of the last year.

So here’s the palette that was chosen for this month’s kit. As usual, I’ve linked it to the main blog train thread at PixelScrapper. 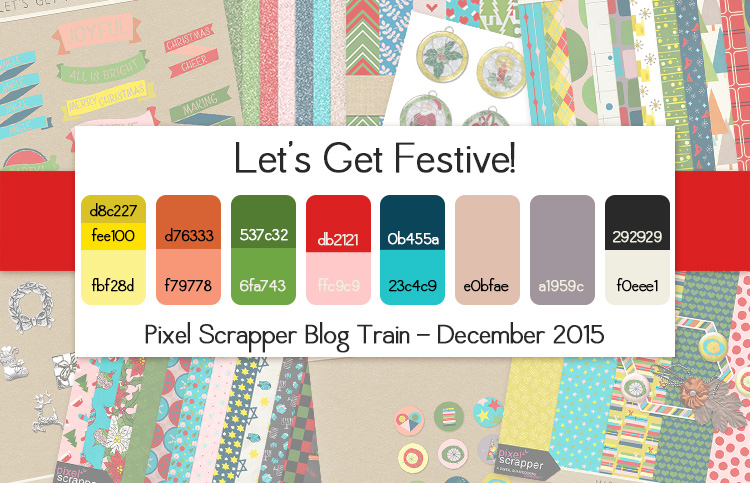 I’ve got a round 2 dozen papers for you this month. The first batch is the mid-century papers, which I’ve tried to make usable year-round rather than just at the holidays.

The second is a set of more traditional holiday papers in a mix of styles, so there should be something here for everyone.

I’ve also included a couple of papers for those of you who celebrate Hanukkah/Chanukah or Kwanzaa, as that’s something I rarely see anyone create even a single item for. As I’m visibly neither of Jewish nor African ancestry, I know that some people might consider it cultural appropriation that I should presume to design something for a culture I’m not part of, but it was either that or exclude you by omission, and I believe that everyone should have something that reflects their own celebration. If you can find Hanukkah or Kwanzaa-specific scrapbooking elements elsewhere, congratulations; if not, there’s at least something here to get you started.

I couldn’t stop drawing elements, either; the preview shows just how many things I’ve created for you this month! There are non-specific New Year’s elements, too, in case your family is like mine and has some December birthdays to celebrate. (My niece turns 1 on the 3rd, so you know the cameras will be out for that!) There’s Santa and an elf, and a snowman, and ornaments, snowflakes, and cookie cutters, just to name a few–and I made sure there’s mistletoe as well. 😉

The snowflakes and snowflake frames are new, drawn specifically for this kit, though I have a couple of packs of them in the shop here as well if you’d like more of them. They’re CU, and the frames come with clipping masks. I’ve just posted a kit of extracted winter foliage in the shop, too, and they’re CU as well, but in their original colors so they can be used as elements. Don’t forget to check the release post for them; there’s a freebie wreath made with the elements just waiting for you to download it, too!

Word art was also hard to stop creating, so there are three separate previews for it, though it’s downloadable as a single ZIP. The first one contains hand-written greetings for holidays in a few places around the world, while the other two are a mix of fonts. I had to resize them for the preview–their original sizes are 4-6″ across, big enough for a large title if that’s what you want to do and easy to scale down for anything smaller. (There are some that would make fantastic holiday cards if combined with a paper and a cluster or frame, if you haven’t made/sent yours yet!)

Personally, it’s been a long month–my doctor says part of the issue with me being tired all the time is a REM-dependent sleep apnea, and he wants me to get a CPAP machine/mask to wear at night. Unfortunately, my oxygen saturation doesn’t drop enough (when averaged through the entire night) for insurance to approve paying for one, even though it does drop enough during apnea events, so I’m either going to have to go without, appeal for them to cover it, or find a way to come up with $800. Stupid bureaucratic red tape. But that explains why I’ve spent the last 6-8 months being so tired that I have to go back to bed when I just got up 3-4 hours ago–I apparently stop breathing about 5 minutes after I hit REM sleep. *sigh* Hopefully I’ll be able to sort the red tape out and get a decent night’s sleep for Christmas. It’s pretty sad when that’s the top of my Christmas list this year, even higher than more RAM, a new hard drive, or a trip to London to spend New Year’s with my sweetie. At least this year is almost over; hopefully next year will be better and I’ll be able to make some progress toward the long-term goal of living in England with him. I know I’ll make progress on my designing skills; I’m constantly trying to learn more!

Thanksgiving, at least, was good; my turkey turned out reasonably moist, and the gravy was flavorful and had no lumps. My stuffing tasted like Mom’s; giblets, onions, celery, sage, raisins, and chopped apple in her recipe make it hard to find anything close elsewhere. The cranberry relish is fantastic–I made a big batch so I could freeze some since cranberries aren’t a year-round thing in stores here. The leftover roasted sweet potatoes got used up in mom’s sweet potato-apple bake (sliced 1/4″ thick, layered on edge in a 9×13 pan with thin apple wedges, sprinkled with cinnamon, and baked at 350F until the apples are done–marshmallow scatter during last 5 minutes optional). My pie crust turned out flaky and didn’t get too brown and the pumpkin filling had that extra little something that I get from swapping the cinnamon and cloves for garam masala. It would have been an even better meal if I could have spent it with family, but that just means lots of frozen meals ready for when a flareup hits.

Anyway, that’s all I’ve got for you on this blog train (only a lot!), so I’m sure you’re ready for a few download links.
Papers
Elements
Word Art

Don’t forget to check the post below this one for this freebie wreath:

And when you’re all done here, head on back to the main blog train thread at PixelScrapper to pick up all the wonderful portions made by the other designers. There are lots of gorgeous previews this month, and I’ll be traveling the train right along with you, because I scrap Christmas too!