Well, January’s almost over, and it’s been a busy month. I’m still working on a mega-kit, but getting closer to being ready for release. I’ve got a bunch of ribbons I’m shooting and extracting for templates for the shop, and I even managed to get to the tote under the sewing machines and find my button box, so I’ll probably release a pack of button templates at some point within the next month or two. But the beginning of a new month means it’s time for PixelScrapper’s blog train, and this month’s palette is full of raspberry and chocolate tones, plus touches of caramel and icy blue. Here’s the palette, linked to the main blog train thread at PixelScrapper. 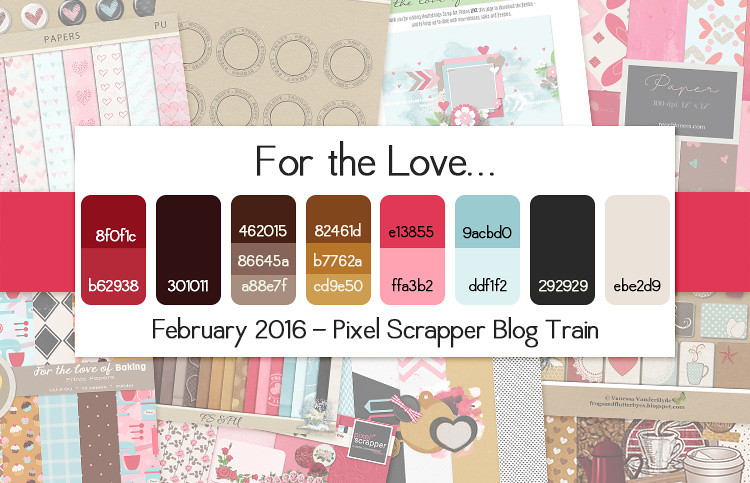 I’ve got a kit full of yummy stuff for you this month, including 5 matching heart-patterned ribbons and bows, a couple of boxes of Valentine’s candy (with a sheer glitter-patterned ribbon which was a pain to extract properly!), satin hearts and candy scatters, and some baked goods with a little personal significance. First up, the red velvet cupcake is the one that was my breakfast last month in the sleep lab, when I had to do that sleep study the night before my birthday. I shot the empty wrapper when I was finished, too, just because it helps end the visual story. The cake was this year’s birthday cake that same night. The cookies are really special, though–they’re from the batch I made a few days after getting my CPAP, a little celebration of having the energy to actually bake something. (In case you’re wondering, they’re oatmeal craisin white chocolate macadamia.)

Speaking of the CPAP, the fight to get it is over, and it’s made a night and day difference in my ability to function. The dishes are caught up, since my energy levels no longer make cooking and dishes in the same day an either/or proposition. The bathroom actually smells clean; there’s no longer noticeable dirt outside traffic patterns due to me not having the energy to push a vacuum. And now that apartment isn’t such a sty, it’s not dragging my mood down even further. Also, having enough energy to cook and clean means I have energy to make things that take more work to cook, especially chopping fresh veggies, which might well allow me to reduce the frequency and severity of my lupus and fibromyalgia flareups due to more nutritious food. 😀

Anyway, here’s what I’ve got for you:

There are a few freebie cluster templates in the previous post, if you want to stop by and pick them up. Once you’re done here, don’t forget to head back to the main thread at PixelScrapper and pick up the other gorgeous parts of this train!