It’s the first of the month, and that means it’s time for another PixelScrapper blog train! This month’s palette is cheerful but calm, perfect for the “Blue Skies & Lemonade” theme. (Image is linked, as always, to the main thread at PixelScrapper.) 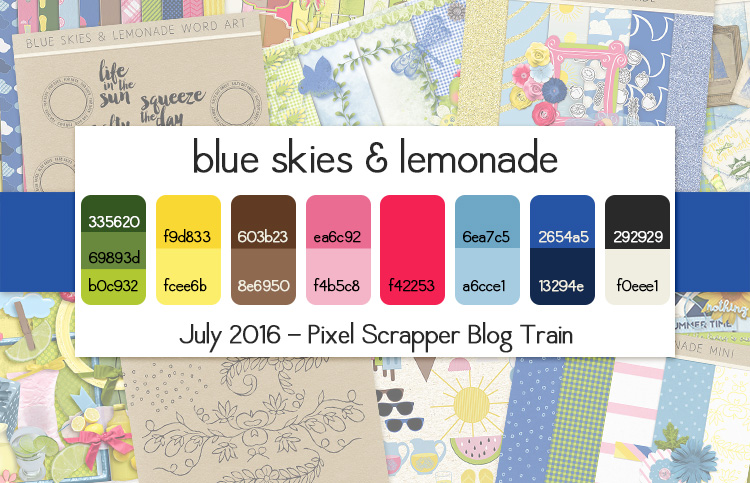 For me, this palette brought to mind lazy summer weekends spent sitting on the porch, enjoying the breeze and a tall glass of something cool and refreshing, whether that was lemonade, ice water, or even Kool-Aid. It made me think of watching the sun go down and the stars and fireflies come out, the sound of the crickets in the evening, and the plethora of dandelions and daisies in the yard. So I had lots of ideas…

Unfortunately, I had other things that needed my attention this month as well: my shoulder has been giving me issues lately, so I’ve been juggling orthopedist appointments and twice-weekly occupational therapy sessions into my schedule. There are a couple of templates in a post below this one for the first-ever PixelScrapper CU Blog Train (“Bath Time”), as well. I also spent some time helping out the incursion community within EVE Online–we put on an event last weekend in-game for charity, and I’d love to talk for a minute about it.

Care for Kids was started a couple of years ago by a Swedish EVE player who, while he was at the hospital receiving dialysis, introduced some of the teens he saw there regularly to EVE. These teens introduced others, and Jonas registered Care for Kids as a charity last year. He started out by giving teens dealing with long-term hospitalization and chronic illnesses a care package with a 2-month subscription to EVE, a pack of starter ships in-game, some real-world candy, and (what’s coolest to me) loaning them laptops to play on while they were hospitalized. Care for Kids has since grown to support 300 hospitalized teens in Norway, Sweden, the UK, Germany, Australia, and now in New Orleans. So when one of our incursion community’s leaders brought up the idea of doing a charity event for Care for Kids, many of us were all for it, even if it would mean a lot of time and effort to put it on. I contributed this poster to the effort, as well as some in-game items and enough in-game currency for a month of game time, and was in fleet running incursions for about 45 hours over the three-day event. (Needless to say, I totally needed the rest of the 27th and the 28th to rest and recover, but I think it was worth it.)

Even with all that going on, though, I’ve still got a pack of cards for you. Just click the image to download.

I ended up with WAY more card templates than I’d intended to make, so I’ve added two new packs to the shop–appropriately enough, entitled “Blue Skies” and “Lemonade Dreams”. Blue Skies is all about the cheerful vibe, while Lemonade Dreams brings in more citrus punch. Both are priced at $1.99 each, should you decide you need them in your stash.

I usually do a blog freebie when I release something in the shop, and this time is no exception. I’ve got a set of finished cards made from the Lemonade Dreams templates here for you. These are flattened, but if you simply wish to use them as cards in your layouts rather than using them as templates, they’ll do nicely. Click the image to download!

Once you’re done here, don’t forget to head back to the main thread at PixelScrapper to download all the other fantastic stops on this month’s train!