We’re fast approaching the end of the month, which means that Pixel Scrapper has another fabulous blog train about to come your way! I’m posting mine a little early this month (it’s the evening of the 30th right now) because I’m still in the middle of moving and tomorrow is slated for loading up yet another trailer-full of things to make the move to storage in another state. We’ll theoretically be done by the end of February, but I was saying that about January too, so I’m just going to have to play it by ear. 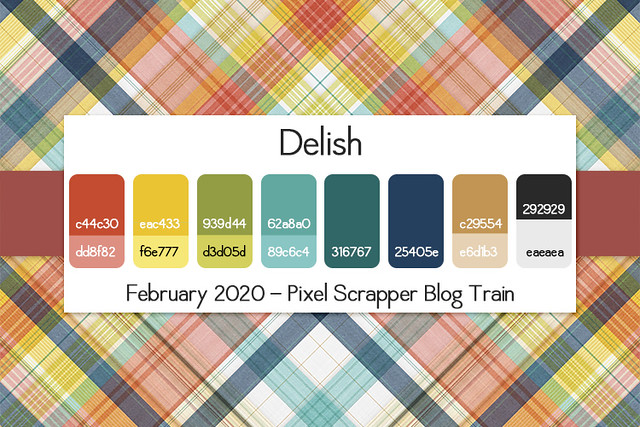 This month’s blog train features a palette of yellows and teals, accented with burnt orange, navy, olive-y greens, golden brown, and a pale peachy shade, along with black and white. I’ve added a neutral grey to it because of all the metal elements that just didn’t look right to me in other colors, but other designers’ portions won’t have that included. Most of you know that I’m somewhat less fond of earth tones than jewel tones, so it should be no surprise that it was difficult for me to get started, or that most of my elements use the cooler teals and navy rather than looking like something out of a 1970s kitchen. Luckily, I’ve been a self-confessed foodie for a couple of decades, and I have a large stash of CU things that I could pull ideas from, so I did manage to get going!

The first thing I did was search my stash for elements and patterns to make some themed papers, and this month’s set turned out beyond fabulous! I found a few pre-made patterns that really sparked the zest for this theme, if you’ll pardon the pun (blame the lemon pattern), recolored them and added secondary patterns in the background to make them uniquely my creation. Then I found a few CU elements and combined them into 3 more themed patterns, and used a few of the templates I’ve made recently to make some more-generic patterns (the two “Love” papers and the split hearts are in my Valentine’s Day paper templates pack in the shop). I don’t think there are enough generic patterns in my paper pack to have all the papers you’ll need for a double-page layout or three, but I’m still quite happy with what I’ve included. The folder was large enough that I chose to split it into two ZIPs for easier downloading. (Download links will be at the bottom.) I also whipped up a set of solids to go along with this train; they use some of the paper textures from my Newsprint Textures released early in the month.

Once I had papers made, I realized that I had a series of cooking things listed in my planned “daily doodles” (actually creating layered templates, but daily doodles sounds better in my planner), but they weren’t scheduled until March–all of March was slated for kitchen stuff. So I moved them up to cram into January; it’s been a little crazy getting them all done as templates, but I finished them on Monday (yes, the 28th). Cutting it just a little close there. I did take one day in the middle of the month to create elements with all the utensil templates I had finished, but the rest of this week has been a hard push making the elements from the pots and pans, small appliances, knives, dinnerware, and the utensils I still hadn’t made by mid-month! I released some of the templates in the shop as I finished them, but the knives and dinnerware aren’t there yet. Fitting them into the preview was a tough job, too; I made a lot of the elements larger than absolutely necessary because some people like to scrap with bigger elements, but that means that 5″ coffeemaker needs scaling down if I’m gonna fit another hundred elements on the preview. But they did all fit, eventually, with some careful layering.

Personally, I still want to add some journal cards and word art to this train, but I don’t think I’m going to have the time with the move and with the March train, since the theme brings up a group very close to my heart; I’m focusing on the tribe of chronic illness and chronic pain warriors who understand my life far better than my own family or my partner’s family. Then again, I’ll have the house to myself for a couple of days here when that trailer-load of stuff goes to the new place, so I might still manage to get some done in between recovering from the flareup from loading stuff up tomorrow.

The Rest of the Train

Now that you’ve gotten all of my portion downloaded, head on over to the main thread at Pixel Scrapper to download the other designers’ parts!